This episode wasn’t exactly the most upbeat one, to say the least.  Not that it was bad at all, but boy, there was a lot going on. 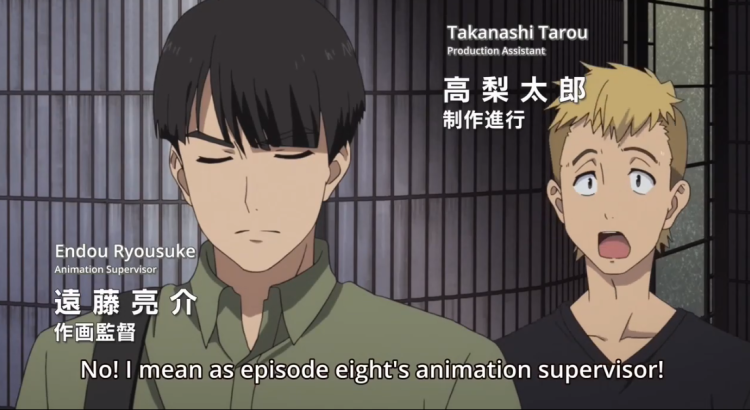 Episode 5 handed the spotlight over to three characters who, in hindsight, probably were my least favorite characters of Shirobako: Endou Ryousuke, Takanashi Tarou, and the lazy, LAZY director, Kinoshita Seiichi.

The thing is, I never disliked these characters because they were done badly.  Rather, these three were just those guys.  The ones where, if you see you have a shift with them, you deflate a bit, and wish you got someone else.  Between Tarou’s lack of seriousness, Endou’s stubborn pride, and Kinshita’s incessant gluttony, there’s a lot to be annoyed with.

But I mention this now, simply because I have to acknowledge, that Shirobako’s done a great job at humanizing these characters.  They’re presented as people–people with their own traits and motivations, with their own flaws.  In that sense, I’ve gotta respect the series so far, for packing so much personality into every character.

I feel as though by the end of the series, I won’t dislike anyone.  But anyways.

The whole plot of this episode dealt with three characters: Endou’s dispute with a 3D animator, Tatsu’s attempts to deal with the resulting flak, and Kinoshita’s inability to keep up with his work.

In regards to Endou, he comes off as obstinate, stubborn, prideful–yet episode 5 made sure to  let me know that he’s a guy with his own opinions, his own problems to deal with.  When you see this guy come back home to a loving wife, hang out with his friends, and present compassionate opinions on what he’s done for a living, you can’t help but sympathize with him, even if just a bit.

On that note, I also enjoyed the focus on Tatsu and Kinoshita–these characters are both not exactly the most serious ones, so some focus on these two, to some extent, was probably necessary.

Tatsu, despite being an overdramatic, wonky guy in general, manages to avoid the trap of being “too much,” as it’s shown that, even if he’s not the most competent worker, he tries, at the very least.  So, even if he’s destined to be nothing more than comic relief, I’m glad that, as a character, there’s a bit more to him than fake bravado.

With Kinoshita, I enjoyed that this episode shedded light on his history as a director, and why he is the way he is now.  Granted, I didn’t enjoy his portions of the episode as much as Endou’s or Tatsu’s, but, at the very least, I can say that he has a personality too.  Despite his complaining often going in circles, without any definite possibility for change, I got to learn more about his passion for the industry, and his personal insecurities, so overall, it was a net win, in my book.

Now, all this being said about the different characters that were being explicitly focused on, I’ve got to just put in a word of appreciation for the fact that I got to see Aoi put her foot down.

Aoi, so far, has been cute.  She’s still stupidly cute.  And I don’t think I’ll get over her cuteness for the entirety of the series.  But, I’m also really glad that, in regards to the immense stupidity taking place around her with Tatsu, Endou, and Kinoshita, she knew when to tell them off.

It was VERY clear that Aoi was rather done with Tatsu’s crap, and as a main character, that’s great, because I was able to sympathize with that.  She was the straightman this episode, and that was a side of her that I’m very appreciative to see.

Finally, I’d also like to note that the continual mention of real-life problems isn’t letting up at all.  Shirobako so far has made it clear that it intends to reflect real life to some extent, and between mentions of the future, of career uncertainty, and talk about growth and progress in a practically applicable sense, I can’t help but feel a growing sympathy for all these characters.

Maybe it’s just because of my personal situation as a college student, looking forward to the future.  But man, this is some great thematic consistency, speaking to some very real worries, and I love seeing it addressed in such a strong manner.  No concrete changes are happening now, but that’s fine, being so early in the series.  What IS happening, is some great set-up.

Now, I’m just curious as to the next episode–who’s going to be developed?  How will Shirobako continue to progress its themes?  And of course, what will be the fate of Exodus?

Well.  Time to move on to Episode 6 then!

Thanks for the positive feedback on the last episodic reaction–these will be a bit spread out, probably, but I’ll try and make them as consistent as possible! :)  I’m really looking forward to the rest of the series, and sharing my thoughts on it with ya’ll, so hope you can stick around!