Anohana is one anime in a line of many emotional tearjerkers.  Because, you know, we all need a good cry every so often right? 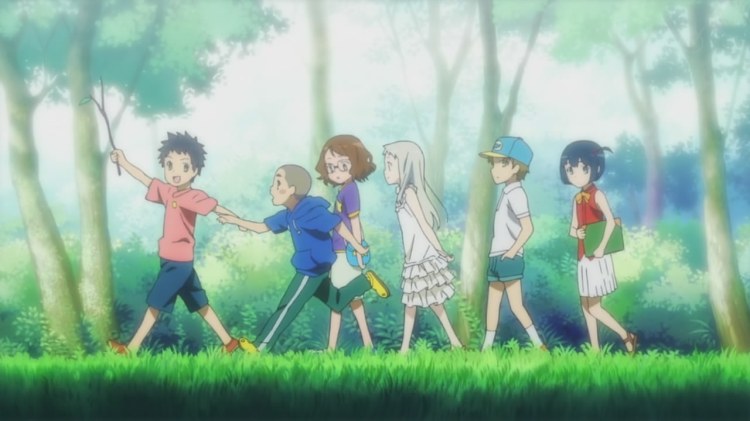 While the story has huge amounts of potential, as far as execution goes, it feels like it tries to do a lot, while ultimately just doing a good job all around.

Jinta Yadomi is a young, high school-age guy, who spends all his time NOT going to high school, instead choosing to play video games and stay home.  The death of his mother and his childhood friend, Menma, have taken their toll over the past few years, turning the once-extroverted, excitable young kid, into a complete recluse.  However, all that looks to change when an older-looking Menma, almost like a ghost, has come back to haunt him!  Stating that she can’t go on to the afterlife because of some unknown regret, Jinta makes a plan to help her, by reuniting their old 6th grade gang, the Super Peace Busters.  However, time has not been friendly to these young souls, all having their own issues to work out, and so, how will they react to Jinta, and the desires of a friend that has been long gone? 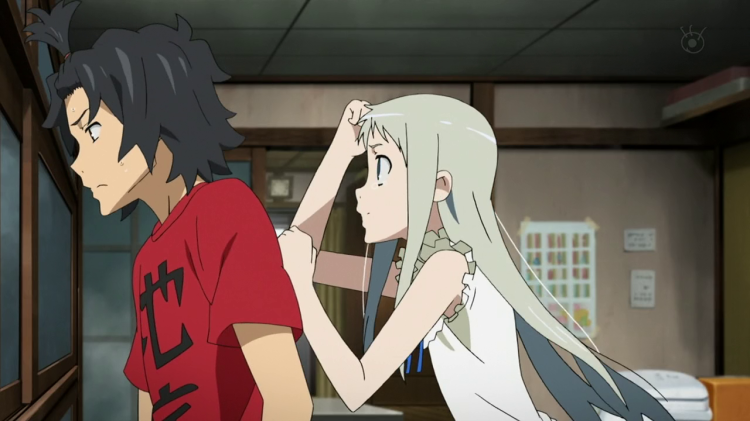 The story of Anohana is very much based on its characters, and the interactions between them, but also, inevitably, revolves around Menma, and the mystery involving her return.  Menma’s presence throws a wrench into the plans of every character in the series, and, as one would expect, forces them to confront feelings and situations that they’d much rather forget.  It’s an interesting concept for an emotional story, and one that has lots of potential for thematic strength.  The themes of loss, friendship, and the hardships of life can all be expressed very well, except… I feel that they weren’t expanded upon as much as they could have been.

It’s obvious that in an emotional anime, characters tend to have their own struggles that they need to confront, leading to growth, and thematic consistency.  However, Anohana’s narrative, and the stories of the characters involved, simply don’t emphasize those consistent themes.  Instead, the show focuses more on the independent problems of each character, which, admittedly, works well, considering the characters we get are really likable, but…it just feels like there’s some missing potential, for deeper thematic and personal significance.

Anohana’s character roster is characterized very well in a short time, with the exception of its most important one.

The featured characters of Anohana are the members of the old Super Peace Busters: Jintan, Menma, Tsuruko, Poppo, Anaru, and Yukiatsu.  Ultimately, these characters, and thieir stories, are at the heart of Anohana, making it either really good if you love them, or really bad if you don’t.  However, thankfully, for most of these characters, they are developed very well, honestly.  We get a deeper look at just about every important character involved, their emotional struggles, social worries, and more.  They’re, for the most part, portrayed very, very realistically, dealing with very understandable problems.  However, one character in particular, the character that the story of the anime revolves around, was done only decently at best: Menma.

The circumstances under which Menma is brought back in one of those times in anime where you have to suspend your disbelief, and I am ALL for that.  However, Menma herself suffers from being assigned to a particular role in the story, without getting the chance to develop much of her own character.  She is the innocent, happy, selfless girl, who, thanks to her personality and circumstances, is able to do things, and see hope for growth, in people who have none.  She gets lots of exposition and history that we see for ourselves, but I just don’t think it’s ever applied to her character in the series in an extremely fulfilling way.  Point being: maybe it’s just me, but I wish Menma were characterized a bit better.

That being said, Anohana is definitely a great anime in regards to its messages of friendship not being so simple, especially considering its ultimate conclusion, and the strength of the characters involved.  Unfortunately, the way in which Menma functioned in the story was not very conducive for the theme of loss, which, again, was hinted at throughout the story.  Because of this, the characters of Anohana are a rather…odd bunch for me.  They are great, entertaining, and realistic to me, but I feel that, similarly to the story, there was just something missing that could’ve made it that much better.

The artwork of Anohana isn’t the best, but it has a very colorful, unique style that works for it, while the music does its job pretty well.

Now, first off, I have to say that Anohana’s coloring style is one of the most stand out  I’ve seen in any anime.  The show didn’t have the best, or most spectacular animation I’ve ever seen, but the sheer color and artistic style of the series gives it something that really defines it.  From an animation standpoint, basic things remained…well, basic, while much emphasis is put on the facial expressions and actions of the main characters.  There was a lot of effort put into the characters of Anohana, and it honestly shows.  It complements the cheerful Poppo, and when Menma shows excitement or sadness, you know it by how she reacts.  This animation is a standard of Anohana, and I definitely enjoyed it.

Musically speaking, there are a few great piano tracks, but unfortunately, nothing exceptional beyond that.  The music does add that bit of atmosphere to the show, but ultimately, aside from the intro and maybe one other song in particular, they aren’t very memorable- they don’t immediately conjure up emotional memories.  Music in an emotional anime is almost required to do that sometimes, portray its individual style, to link the emotion of that series to something concrete.  However, as good as the music of Anohana was, I just don’t think it accomplished that.

Ultimately, the series was definitely enjoyable, and thought provoking, but had just a few too many flaws for it to feel like something great.

I’ll be honest here, and say that Anohana was an anime that did touch my emotions.  It was very sentimental, very good at detailing character growth, and was ultimately a very solid show.  Anohana, did not, however, provide many of the “raw” moments that other great emotional series did, until the very end.  And honestly, the ending of Anohana, due to lack of explanation and an odd build-up, ends up being very hit-or-miss.  Depending on what kind of a person you are, how caught up you get in a series, I can imagine that Anohana’s ending hits some people HARD.  But a bit unfortunately I guess, I’m not one of those people.

It’s a quality anime, a good emotional ride, but it’s one that isn’t indisputably great.   That said, I enjoyed it, and I think there’s a good chance you might enjoy it too.

9 thoughts on “Reading Between Reviews: Anohana: The Flower We Saw That Day”