What does it mean to have depression?  What does it look like?  And how can we help stop it?

Orange is one of those feely anime.  You know the ones- through some way or another, they aim to make you cry, convey a message, and make some meaningful, powerful statement that makes you think about life.  Normally, these anime tackle powerful, crippling backstories, relationships that make the characters tackle huge moral questions, or romance that forces the characters to face their innermost demons.  However, Orange is not quite like that.

Simply put, Orange deals with depression.  It’s rather tame, as far as feely anime go, but that doesn’t stop it from being profound and powerful in its message.  Orange has many things it does wonderfully, and others that, honestly, I found a bit of fault with.  There’s a lot to say about it, and so, let’s get to it!

Naho Takamiya and her friends live in a future that could have been a lot better.  Things have changed a lot since their high school days- they all have their own lives, Naho is married to her long-time friend Suwa, and, despite all their great high school memories, they don’t see each other often.  However, more significantly, for a reunion to dig up a time capsule, buried 10 years ago, one of their number is not there: Kakeru.  Having been lost to an accident, Naho and co. realize something huge- that perhaps, the accident that Kakeru was in might not have been so accidental. 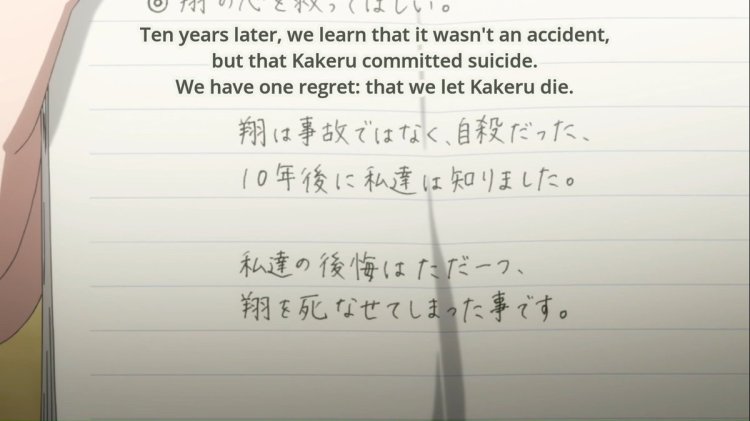 In the past, a younger Naho receives a mysterious letter, detailing everything about this mysterious transfer student, Kakeru, and how their lives end up intertwined.  Filled with the regret of ten years, the letter asks one thing of Naho- to save Kakeru.  So, the question now is this: will Naho be able to change the future?  Will there be a future where Kakeru will be able to laugh with Naho and the rest? The story of Orange is simple, but powerful.  Covering themes of regret, depression, and of course, friendship, for the most part, Orange stays very grounded in reality.  Revolving around the story of Kakeru and Naho in particular, their characters make the show worth watching.  With each episode, we get to see how Naho wishes to change the future, and how the present is affected by the decisions she could or could not make.

What detracts from this story, however, is a sense of…slowness, and not knowing when to quit with its explanations of “time travel.”  When a show chooses whether or not to explain a key idea, that’s fine- I am perfectly okay with suspending my disbelief for giant mechs, ridiculous powers, and more, for the sake of story.  However, the fact is, the show devoted a bit too much time to explain the letters, when in the end, they didn’t really matter to the main message.

The characters of Orange are definitely, DEFINITELY its strongest point.  They are the reason the series is emotional, especially considering the story of its singular, main character. Kakeru’s development, the realization and growth of his character, is done wonderfully.  It is no secret that the whole point of the series is his struggle with suicidal thoughts, and Orange treats this struggle with huge respect.  I can’t speak for others who might know better, but the anime depicted his depression in a very real light, a welcome change from anime that exaggerate many emotional reactions.  The audience gets to see many dimensions to Kakeru’s character, and is undoubtedly the most relatable character of the series- the one which makes Orange such a wonderful experience.

That being said, however, the main protagonist, Naho, is done very well too.  She is a simple high school student, and she is never presented as anything more than that.  A bit shy, very cute, slightly awkward, and very kind-hearted, Naho is the kind of protagonist I found myself rooting for- even if she does make some mistakes sometimes.  Some people can find her a bit dull at times, but honestly, to me, she just felt real.  If you’re looking for hilariously exaggerated personalities, as anime is prone to doing, then you’re better off looking somewhere else, but if you’re fine with very simple, down-to-earth characters, then Orange has got you covered.

Even the other side characters are engaging, in their own way.  Their personalities are very defined, but they never come off as extra, or unnecessary.   Hiroto Suwa’s the papa bear of the group, Takako Chino is the excitable, peppy one, Sagu Hagita is the unfit nerd, and Azusa Murasaka is the relaxed, yet sassy girl.  The dialogue between them is so conversational, so casual, and it creates a surprisingly good group dynamic.  It comes into play several times throughout the story, and I’m simply glad that such a group can exist in anime- it’s very normal and down-to-earth, but this group dynamic is also very effective. 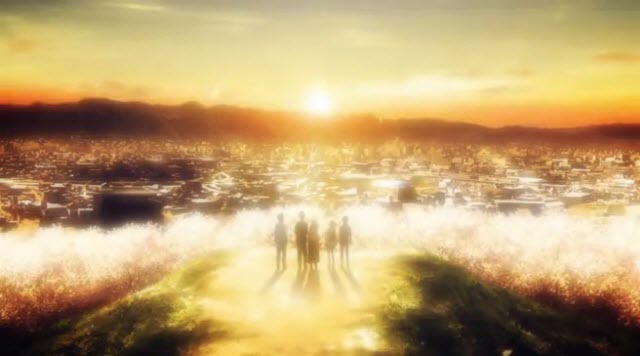 Simply speaking, Orange looks beautiful.  It’s not the most detailed animation in the world, don’t get me wrong, but the coloring of the backgrounds, the character designs, the lighting, it’s all done phenomenally.  This is only augmented by the musical design for the show, which, again, is not the best in the world, but serves its purpose.  These two things in tandem succeed in giving Orange some of the most emotional tension, the most emotional atmospheres, I’ve seen in any show.

Orange is great at creating moods: atmosphere that feels so delicate, that any wrong word would be catastrophic.  An atmosphere that feels so uncomfortable, that the wrong move could mean a ruined friendship.  It feels very delicate at all times, which, honestly, in some cases, makes the development of the plot seem rather slow.  However, there are specific moments which use this emotional atmosphere to its fullest.  In characterizing Kakeru in particular, these emotional moments accentuate every word, every action, and they make his story all the more powerful.

However, that being said, despite some wonderful animation and a tone that works for the series, there aren’t truly any exemplary moments that make Orange stand out.  For other emotional series, there’s usually those specific moments where the animation is done spectacularly, or that one song plays, that makes you think of that one series.  Orange doesn’t have that, in my eyes.  There are specific points in the story that have huge emotional payoff, and because of the quality of the series as a whole, they hit you, but I just feel that it could have been done a little bit better- made a bit more distinctive.

Orange was a show that is honestly hard to judge for me.  It excelled at touching my feelings, and is one of those rare shows that deal with a realistic topic in a respectful, accurate way.  However, the critical side of me had a little bone to pick with it- there were moments that could have been done better, or, story-wise, were unnecessary.  Basically, there were just a few small things that held it back from being exemplary.  That being said, Orange’s thematic depth, emotional weight, lovable characters, and solid execution made it a show that I greatly enjoyed.  It touched my heartstrings, tears were shed, and overall, I gotta say, watching this anime was time very well spent.

Recommended If: You like anime that plays with your emotions, you can relate to feelings of sadness, and you are willing to suspend your disbelief to a certain extent.