I think, generally speaking, we know what we like about seeing Tsunderes, right?  People have actually analyzed why we tend to like such characters, but it makes sense why they would be attractive anyways.  They manage to be cute, while still maintaining an aggressive vibe, making them extremely fun characters to watch.  The way in which such characters represent the extremes of aggressive behavior, and affectionate, almost shy behavior has proven to be quite interesting.  However, we’ve gotta ask- why do they behave that way?

Opinions of all kinds can be seen across the internet, putting forth the idea that the tsundere can exist in real life, or that tsunderes actually display Bipolar Disorder, that they display psychological “splitting,” among many other arguments.  As a psychology student, I’d like to pitch in my opinion on the character type- maybe provide a bit of a fresh perspective on the famous archetype.  Man, honestly, I’m really, really excited to share what I’ve found out, so, without further ado, let’s get to it!

What Makes a Tsundere?

The term “tsundere” is a combination of two Japanese words- tsun, meaning to be aloof, and dere, meaning to be sweet.  As one would expect then, a tsundere is a character distinguished by an outwardly violent personality, while still retaining a softer, more emotional side.  This generally tends to apply mostly to the world of romance, where a character, usually female, acts angry and aloof towards their love interest, while showing them, only in very specific circumstances, their true loving feelings.

The exact origin of the term can be traced back to message boards regarding the visual novel Kimi ga Nozomu Eien, specifically speaking about the character Ayu Daikuuji.  It is on those boards, where the terms “tsun tsun” and “dere dere” originated, eventually combining to become a singular, well known trope- the tsundere.

However, what we’re here to talk about is not the history- rather, what exactly ‘is’ a tsundere?  Why do they do what they do?

Well, just on a general note, there are multiple types of tsundere, but for now, we’ll focus on the type many people know and love- the one with a prickly exterior, and a sweet interior.  There are numerous behaviors they exhibit, from simple silence, to actively hitting and hurting the target of their affections, but the underlying idea is that, in some way or another, they show aggression.  Often times, this aggression makes them seem tomboyish, despite, in many cases, having a hidden “girly” side.  They may find it hard to show their affections- as can be seen from the oh-so-common quote, “I-I-I’m not doing this because I  l-like you or anything!”  Baka.

On the other, “dere” side, behaviors exhibited aren’t unlike those of a regular girl in love.  They may give gifts to the one they love, help them out with their problems, or even just help with basic chores/tasks.  Of course, these are all with the stereotypical, passive-aggressive “tsun” attitudes, but the point here is the same.  This “dere” side is the side which one would associate more with regular love and care, whether that takes the form of protection, gift-giving, or general assistance.  Of course, this also tends to be expressed through increased honesty, tenderness, and general embarassment.

So far, we can assume that for a stereotypical Tsundere, they DO indeed love their significant other, it’s just that lots of their behaviors towards said person can be extremely aggressive.  Their “tsun”behaviors tend to be surrounding just a single individual, although they tend to be pretty assertive in general.

What we need to know, starting out, is why must a tsundere Generally speaking, psychologists tend to agree on two different kinds of aggression: Impulsive, and Instrumental.  Impulsive aggression is the emotional kind, the non-planned, natural variant, while Instrumental aggression involves planning- hurting another individual for an explicit purpose.

Now, from the general behaviors we see from tsundere characters, I doubt we’re dealing with Instrumental aggression- rather, the tsundere just tends to have a natural predisposition towards angry behavior, and so, deals with Impulsive aggression.  In real life, violence between couples, but not other friends, can happen.  This can make some people worry about “loss of control,” or impulsive behavior.   However, with normal couples, there IS a cap on the violence, what is considered okay or not.

Similarly, with tsundere characters, despite the obvious, natural, impulsive aggression, we never actually see major wounds happen- as if the tsundere, despite verbal and physical abuse, knows not to overstep boundaries.

To sum this up, people with more Impulsive aggression generally tend to have less of the neurotransmitter Serotonin, and guess what happens when you’re in love?

Okay, so we’ve justified the kind of aggression that a tsundere displays.  But why is this aggression so consistent?  Why does  a tsundere seem to be so consistently angry and aggressive to the one they love?  That all has to do with a little thing called “Frustration-Aggression Hypothesis.”

This is the most important factor in why a tsundere character tends to be so distinct- simply put, the Frustration-Aggression Hypothesis says that aggression is a result of having one’s goal blocked, and not being able to do anything about it.  It’s why someone who just failed a big test might be prone to lash out at another person who did nothing wrong, or why someone who feels inadequate might reflect that anger onto someone else.

But then, that begs the question, what’s the goal?  Why are tsundere characters so consistently driven to frustration in the first place?  I believe that the answer is fear.

Okay, not like a legitimate phobia, but more so a subconscious fear of love, closeness, and above all, a fear of being weak.  The ultimate goal of these tsundere characters, across the board, tends to be a desire to come off strong, for one reason or another.  This behavior isn’t actually uncommon- one Dr. Marcia Reynolds, who has written books directed to high-achieving women, actually gives this desire a name: The Burden of Greatness.  She writes about how high-achieving women who feel such a desire may have been taught to be strong, hate the thought of being needy and dependent, and may have grown up with parents that instilled a sense of independence.

Huh.  Now ain’t that something.  So basically, these tsundere characters may have this “Burden of Greatness,” similarly to how high-achieving women in real life may feel.  As a result, when running into a person that they begin to fall in love with, start to feel dependent on someone else, they respond with anger, according to the Frustration-Aggression Hypothesis.

Let’s look at two of the most well-known tsundere characters- Aisaka Taiga of Toradora!, and Tohsaka Rin of Fate/Stay Night.

Taiga is a small, cute character, with a huge mean streak- because of her stature, general size, and ferocious behavior, she has earned the nickname “Palmtop Tiger.”  Towards Ryuuji, the protagonist of the show, she is exceptionally violent, surprising him with gut punches, attempting to hit him with a wooden kendo sword, and far more.  However, she comes from a broken family- her father has essentially abandoned her, and her mother has created a new family, which Taiga feels like a burden for depending on. Ultimately this results in her fear of falling in love- representative of the Frustration-Aggression Hypothesis, with how fervently she refuses to acknowledge her feelings.

As for Tohsaka Rin, from a young age, she was taught by her father that she had to be the successor to her family’s magecraft.  Growing up this way, she learned to be a perfectionist, earning the admiration of her peers.  After the death of her parents, losing them both to war, she inherited the land her family owned, and eventually had to get involved in war herself.  She acts cold, pragmatic, and hostile, but ultimately, cares a lot for people, and in particular, the protagonist, Shirou.  Based on this history, it seems clear that she has certainly dealt with the Burden of Greatness.

Looking at other tsundere characters, I was personally surprised to find that most of them adhered to these ideas!  There is Impulsive Aggression across the board, many seem to fear love, intimacy, or general weakness, and many seem to be in positions where they must deal with the Burden of Greatness.  I mean.  Even Ayu Daikuuji, the original tsundere, operates, and takes care of part of her family’s restaurant chain!  That certainly sounds like a position where she’d be placed under such a burden. 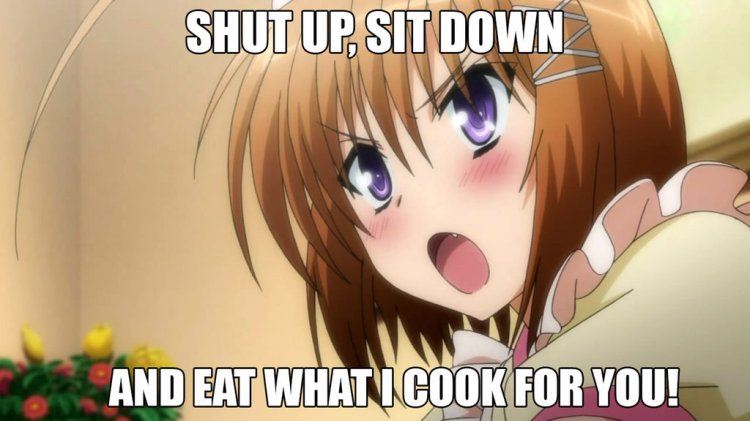 All in all, we can conclude that a tsundere character, from a psychological perspective, will most likely have a past that requires them to perceive themselves as strong, or independent.  That is the Burden of Greatness- they may be high-ranking officials, perhaps they’re pressured by their family, or just, in general, they may be highly motivated.  Because of Frustration-Aggression Hypothesis, when they feel affection or dependence towards another individual, they respond with aggressive behavior of different kinds, unconsciously aiming to physically or emotionally hurt the person of their affections.  And of course, these behaviors tend to be categorized as Impulsive Aggression- primarily emotional responses to their frustration.

So next time you see a tsundere in an anime- just wait for their tragic backstory.  Then this’ll all make sense.  Or if their backstory isn’t provided, just know that there’s definitely a reason they’re like that.  For sure.  Maybe.

That’s all for this analytical post- a like, a comment, a follow, anything would be appreciated, because this was actually the most research I’ve ever done for one of these posts.  Not to say it wasn’t interesting or fun, but.  Man.  This was something.  Kinda like a more fun research paper.

Anyways, see ya’ll on the blog another time- come Monday, I’ll be talking about my five favorite old-school games, so if you’d like, stick around, and check it out!

One thought on “A Psycho-Analysis of the Tsundere”