If you would have told anyone 16 years ago, that a hugely beloved franchise could spawn by combining Final Fantasy and Disney into a hack’n’slash adventure game, I’m certain many people would just think, why, and how?  What kind of strange concept IS that?  Well, in 2002, such a game was released: Kingdom Hearts.

Kingdom Hearts starts in a mysterious world, the Destiny Islands, where Sora, and his friends Riku and Kairi live peaceful lives.  However, one day, their peace is shattered when beasts known as the Heartless invade their world.  Obtaining the enigmatic weapon known as a Keyblade during the invasion, Sora finds himself thrust into a huge quest spanning multiple worlds, dealing with forces and creations beyond imagination. 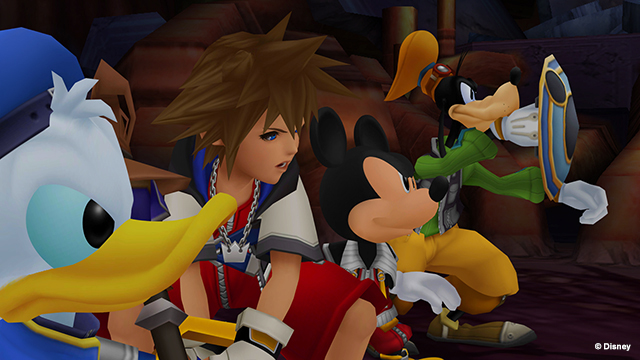 So, Sora, as the protagonist, essentially just travels between different worlds- giving him a reason to see characters such as Maleficent, Donald Duck, Peter Pan, and a huge assortment of other Disney characters, all under the pretense of fighting the Heartless threat.  Simple enough?  Well.  No.  As many fans of the series note, the plots of the games, the lore being told, the history behind the different fates of the worlds, are insanely, ludicrously, absolutely needlessly complicated.  It’s an awesome story to follow, don’t get me wrong, but Keyblade Masters, wars we know nothing of, Nobodies, Heartless, Organization XIII, a Realm of Darkness, a Realm of Sleep, and a plethora of other competing interests makes it a bit hard to get into. Anyways, I digress.  Kingdom Hearts stands out though to many for its surprisingly intense, tone-driven story and gameplay.  Despite the confusing background, the games provide just enough information to make each confrontation feel like the worlds are at stake, and has great hack’n’slash mechanics to back it up.  Musically, the game excels as well, able to convey everything from jubilee and excitement, to melancholy and intensity.  Together, it all combines into a game that is fun to play, and the constant influx of Disney characters into the basic story of the game males it a rather interesting experience to play through.  Just a shame that the full story, even if good, is so DAMN hard to keep track of.

Any thoughts on Kingdom Hearts guys?  If you haven’t played it, what’re your thoughts on the premise?   And if you have played, well.  Are you ready for Kingdom Hearts 3?  It’s about time we get a direct sequel!   Leave your comments down below!  (☞ﾟヮﾟ)☞