Kirby Air Ride was one fun game, am I right, or am I right?

Hey guys, back again for a Throwback Thursday, this time I’m gonna talk about a game that doesn’t have any narrative value whatsoever, but holds a place in my heart as one of my favorite party games- Kirby Air Ride! So.  Just a refresher, Kirby Air Ride was a racing game that released for the Nintendo Gamecube back in 2003, featuring, wouldn’t you know it, Kirby!  Riding vehicles like the iconic Warp Star, to the Rocket Star, Boost Star, and even more such stars, you got to swallow enemies, shock opponents, and race for supremacy!  Across three modes, there was plenty to do- Air Ride for if you wanted to just straight up race, Top Ride for a different, top down sort of racing experience, and City Trial for some of the most addicting gameplay in the world.  It was a fun game, one I remember quite fondly!  Honestly though, although Air Ride and Top Ride were fun, if you played the game before, you know what mode was REALLY the king. 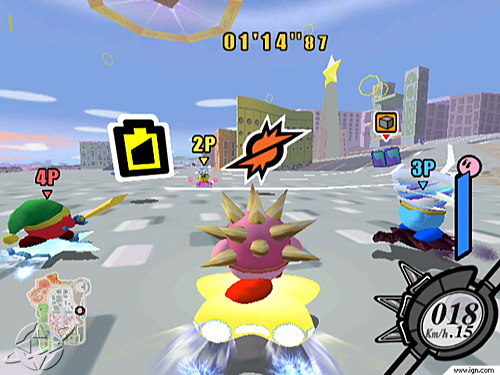 City Trial was absolutely the greatest mode that Kirby Air Ride had to offer, and turned what should have been a simplistic game with four hours of content max, into a stupidly addicting experience with huge replay value.  Collecting stat drops, breaking boxes, struggling through events, and experiencing that burst of adrenaline upon finding pieces of the legendary vehicles, every game was different, and that’s what made it crazy fun.

To top that off, you’ve got a huge array of vehicles that can be unlocked, each with its own unique feel that, unlike other racing games I’ve tried, doesn’t feel arbitrary.  You can choose a vehicle that has just below average speed, but great handling, to a vehicle that has huge bursts of speed, but can only move in straight lines, to vehicles that glide in the air for what seems like forever.  The amount of variety packed into such a simplistic game is what really made Kirby Air Ride a fun party game, as you never knew how each race, each city excursion would end.  It was a highlight of my childhood, that’s for sure.

If you guys have played the game, what do you think of it?  Any fond memories?  Let me know down in the comments section! :)