Huh.  I actually thought we’d have a hiatus.  Dang, could’ve sworn I saw that somewhere, not that I’m complaining!.

Anyways, dang, this episode was pretty good.  Finally got some progression to Weiss’s and RNJR’s plot lines, after three episodes of Blake and Yang focus, got some good world building, and the first true cliffhanger of the season!  I have a good amount I’d like to talk about here, and so, let’s just get into it!

Finally, we get to see team RNJR, and man, I have missed these guys.  Their interactions are actually pretty great, and even if Ruby isn’t actually part of JNPR, her innocent and kind nature really is fun to watch with Jaune’s derpiness, Nora’s excitability, and Ren’s stoicness.  I mean, really Ruby?  Two weeks?

Ren’s exposition in this portion of the episode provided some interesting details- nothing extremely relevant to the plot, but putting forth the idea of such political drama behind the birth and death of Oniyuri makes for some interesting background information about Mistral.  What happened in Mistral to prompt the building of Oniyuri?  And of course, what did Ren’s parents have to do with it?  And of course, Ren’s statement that a singular Grimm was responsible, and the birds that scattered as he said that- what Grimm could have done it? 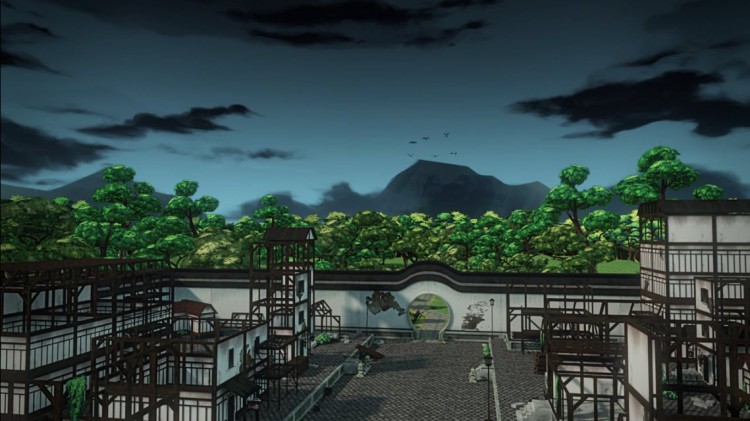 This does debunk the idea that bandits and raiders killed Ren’s parents, but then, what did the group that raided Shion- Raven’s group- do that makes Nora and Ren familiar with them, as seen in the second episode?  There’s so many small details that don’t quite add up yet, and in true RWBY fashion, they’re answering just enough to keep the fandom sated, without giving us enough to piece the whole thing together.  Suffice to say, between Ren and Nora’s backstories, the history of Mistral, and Raven’s group, we have quite a lot to speculate on, and I’m really looking forward to the unveiling of some answers, given some time.

Weiss, the State of Atlas, and Ironwood

Next, getting to see Weiss’s concert was…I’ll be honest, rather disconcerting.  Casey Lee Williams did a wonderful job with the vocals so far, but I was sort of hoping for Weiss’s VA to sing- I realize that’s a rather far-fetched thing to ask for, but it just felt odd hearing Casey’s voice from Weiss’s character.  That, combined with the fact that the concert was ALREADY happening, was just a bit disorienting.  Not to say that it was bad, but I’m sure many people, myself included, were rather surprised.  Despite this, it led to, in my opinion, the most blatant display of character growth in the entire series: Weiss’s interactions with the upper-class citizens of Atlas. 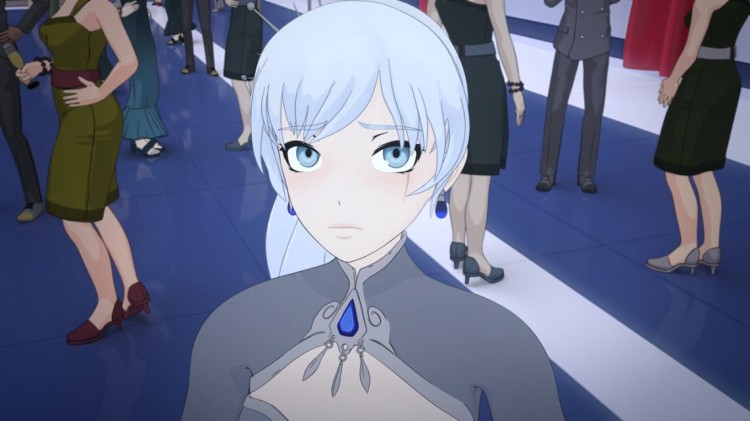 The gala we see Weiss and her father attending is interesting to me for two reasons.  First, we get further affirmation that her father’s an asshole.  Grabbing Weiss roughly by the wrist, making conceited jokes, selfish arguments- this guy is just completely unlikable.  However, we knew that already- I mostly enjoyed it simply for the fact that I could definitely imagine a Volume One Weiss being, if not completely comfortable, still relatively at home here.  Prissy, stuck-up, not at all involved with being a huntress quite yet, Volume One Weiss would, at the very least, have been able to blend in decently with the crowd.  However, as we see, Weiss here is just…completely uncomfortable, completely done with the crowd, and by the end of it all, even flat out infuriated. 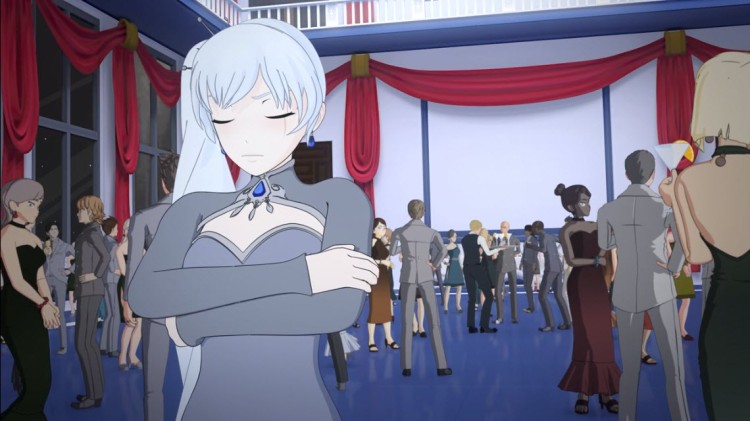 The conversations and topics pursued by the crowd speak to the privileged, disconnected status of these citizens, but Weiss’s interactions with Henry Marigold, aka “Discount Neptune,” display this most prominently.  He, as he puts it, is only there for the food, drinks, and social life, doesn’t even realize what the whole event is for, and Weiss’s reaction to that blatant ignorance is justifiably strong.  To top it all off, we get the hilariously hypocritical name for the charity painting shown, “Show The World We Care.” 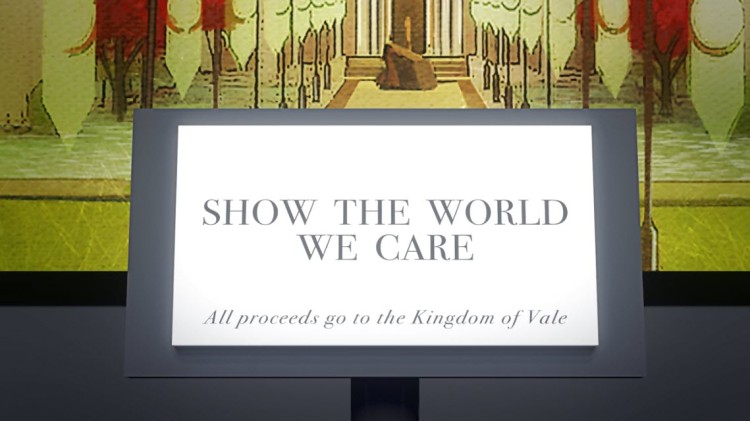 Weiss’s outburst is something that I’ve been eager for, her defiance against her asshole of a father being so satisfying to watch.  Showing that Weiss has become a lot warmer than the cold, impersonal nature displayed of Atlas, her summoning, outburst, and defiance of her father were extremely gratifying to me. Ironwood’s acknowledgement of Weiss was also very enjoyable.  Remember that time between Volume Two and Three where everyone hated that guy for butting heads with Ozpin and seeming to treasure force over subtlety?  Well, his honest, blunt, but good-intentioned nature shines through here, providing Weiss with some much-needed support, and perhaps shows that, despite the anger of Jacques Schnee, she will have allies for the coming chapters, in the form of himself, and presumably Winter.

And here, we have the highlight of the episode- finally getting to see another fight scene, and seeing Tyrian, direct servant of Salem, interacting with the main protagonists for the first time.  Ren was a badass for being able to detect Tyrian at all, but I just gotta say that I’m loving his manaical, psychotic behavior.  The small details mean a lot: his Junkrat-esque laughter, his high-energy sprinting, and his dynamic fighting style all contribute to a character that is immensely fun to watch in action.  I’d just like to get that out of the way, that this fight, Ruby’s electricity gambit with Nora, Tyrian’s fighting style, it was all awesome. 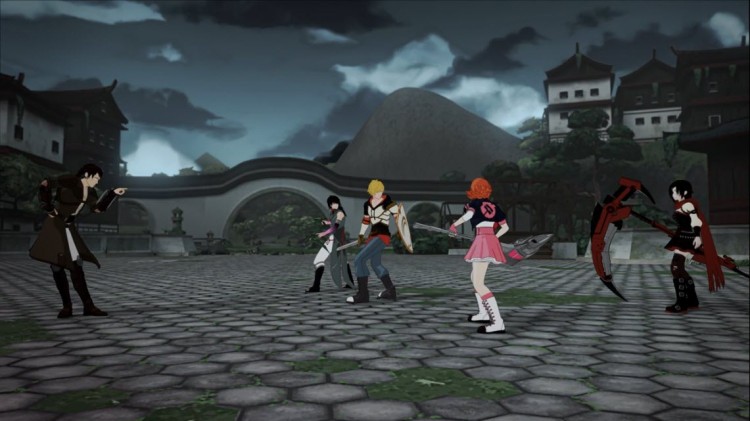 Anyways: hearing Tyrian’s introduction, and how he’s specifically interested in Jaune and Ruby poses some questions.  Why be interested in Jaune at all?  Does he just have a unique fighting spirit, or is there more to it?  And of course, what’s up with his words towards Ruby that she doesn’t even know?  It would appear initially that he’s talking about Ruby not knowing how to use her silver-eyed warrior powers, but Ruby is already aware of the legend at least, making that a rather odd thing to reference.  Could Tyrian be talking about something else?

Also of note here, is that when Tyrian revealed that he’s a scorpion faunus (man, his design is just badass) he mentioned that he serves his “goddess,” obviously referring to Salem.  However, the fact that he mentioned that detail in front of Ruby and the rest is notable, simply because up to this point, all Ruby and the rest have assumed, is that Cinder is the ringmaster, the true leader.  However, he denied that in front of them, and made reference to someone higher, even speaking badly of Cinder.  That’s a transition point, a huge one I think.  It signals the first time that Ruby and the rest may become aware of a bigger fight, and even if their immediate goal does not change, it certainly means a lot, that they have begun to learn of the fight that Ozpin’s inner circle was fighting.

Speaking of which, the cliffhanger with Qrow was done so well.  The frantic music, Tyrian’s beatdown of RNJR, and Qrow’s urgent sprinting all put off a huge sense of urgency, and made it oh SO satisfying when Qrow blocked the stinger.  Ruby’s smile, Qrow’s casual acknowledgement, that moment between them was probably my favorite moment of the episode, showcasing both their personalities extremely well.  Ruby is still innocent, despite her ability to fight and her knowledge of the Grimm, and Qrow still cares for Ruby very much, in that casual “cool uncle” way, and this exchange just felt so good because of that.  What to look forward to now, is that, now, RNJR knows they have someone looking over them- and the implications behind that are…quite interesting.  We can wait till the next episode to find out exactly how they react, but this reveal shifts the dynamic of RNJR’s mission quite a bit.  This isn’t just a trip to find Cinder in Haven anymore- it’s going to become a lot more important than that- the Tipping Point, if you will.

So now, we have Qrow vs Tyrian to look forward to, presumably some exposition on Qrow’s part afterwards, and well, honestly, who knows what else.  Perhaps it’ll be a RNJR focused episode, or perhaps we’re gonna go back to Yang’s perspective.  Regardless, I’m looking forward to it.

Hope you enjoyed some of those random thoughts, I really enjoyed this episode!  Finally feels like we’re getting the ball rolling here, and we still have (presumably) half a Volume to go!  Do you have any thoughts on the new episode, any important details you’d like to bring up?  Comment if that’s so, I’d love to hear it!