Alright, back again with a chapter that doesn’t progress the plot too much, but gives us a very interesting update on the blonde bombshell, some light as to why that farmer kid is in RWBY at all, and an intro to a character we’ve been waiting YEARS to see.  Volume 4 is continuing to be rather intriguing, but without further ado, let’s get to it!

I mean, did anyone REALLY doubt it?  Salem knew, we knew, Ozpin couldn’t have died nearly that easily.  The only thing was that no one really knows happened to him.  That being said, this little scene at the beginning of the episode provides a LOT to be potentially excited for. 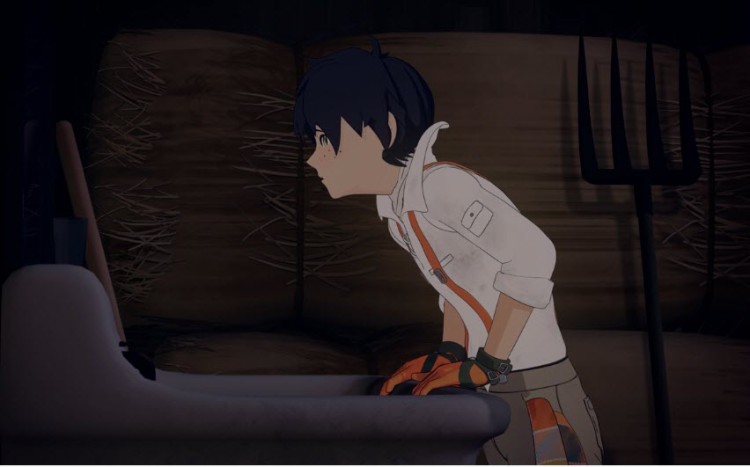 Now we know why this kid, Oscar, was included in RWBY, and you can bet now, for sure, we’ll be seeing a lot more of his interactions with Ozpin throughout the rest of the Volume.  I’d also like to take special note of how exactly Ozpin interacted with Oscar though- through a mirror, with seemingly no physical body to speak of.  I find this INCREDIBLY interesting, because, although it almost seems expected for Ozpin to be such a mystical character, this finally means that we’ll get some knowledge about the extent of Ozpin’s true power.  We all know he’s powerful, underneath that casual facade, but we don’t know how, and I’m excited that we might finally get to see Ozpin in a strange setting, where he’s been pushed to the point that he can’t even use his body to communicate. 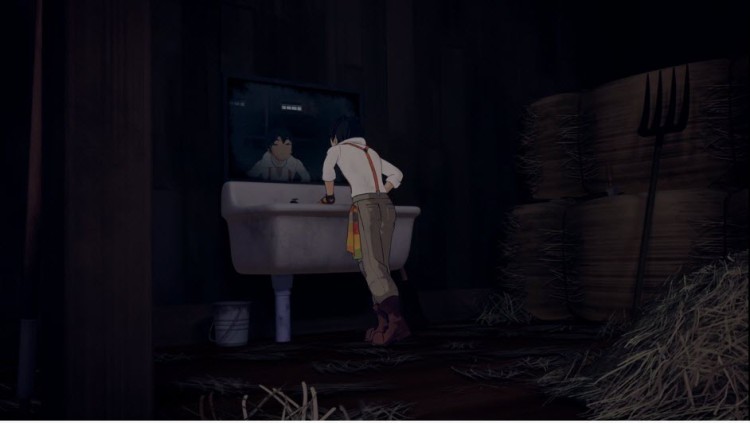 Did Cinder destroy his body, but not his soul?  How did Ozpin fake his death to Cinder, and how did he escape?  And is he only talking to Oscar out of desperation, or is there a deeper reason?  It’s exciting to speculate, but only time will tell.

On Yang’s Issues, and Fatherly Love

The next section of the episode, taking another look at Yang, was rather…interesting.  It confirms that Yang is messed up, and we get very blatantly shown how comfortable she is with Taiyang, but beyond that, this section shows a conflict between what Yang desires, regarding moving forward, and Tai’s own struggles involving being there for his daughter.

First off, I’d like to note the effectiveness of the dream sequence involving Adam.  It was a short scene, yes, but it was still very well done.  The intimidating way in which Adam was portrayed, the fear being shown in Yang’s eyes, and the surreal, dark tones of Beacon: it was well done, and showed where exactly Yang’s demon lies.  Not with her arm, exactly, not with the pain of the Battle of Beacon, but with the one she perceives as responsible.  It’ll build up to something, and I’ll be looking forward to the day when Yang finally ends up meeting Adam face to face, because I’m certain that will be a great moment for her character. 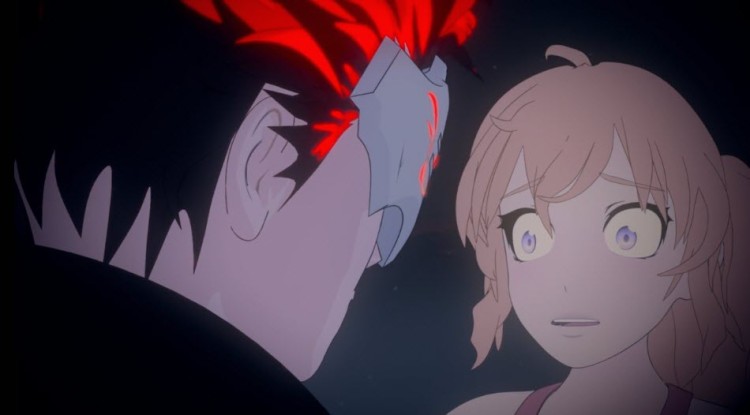 The scene with Tai, Oobleck, and Port was much appreciated as well, for multiple reasons.  It was in my opinion, the most well-done casual interaction that the show has been able to put out, with natural-sounding laughter, a very relaxed tone, and animation that complemented that.  However, I appreciated this more for the light it shed on Yang’s and Tai’s own problems.

Tai and Yang, interestingly, seem to be very open about talking about the loss of Yang’s arm- an odd fact, since, as Port and Oobleck show, you’d expect that to be something to take rather seriously.  It shows that Yang does have some of her lighthearted old self in her, and ultimately, I think that the way in which Yang acts here, shows her that the loss of her arm, in all actuality, ISN’T Yang’s biggest problem.  She mentions that she had doubts about trying on the arm, simply because she doesn’t want to walk away from how it happened, and the reality of what took it away from her.  This is in contrast with what Tai seems to think, and how he seems to advocate simply moving forward by trying on the arm, and working for what she wants. 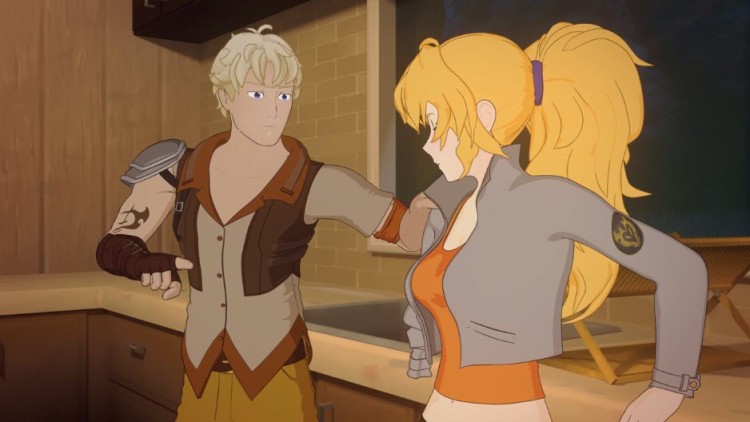 Tai here provides the role of the strict father: one who cares about his daughter no doubt, but still has his opinion on what Yang needs to do to move forward.  He manages to come off as very caring, but it all felt rather awkward- lots of great words, and great advice came out of his mouth, but throughout it all, Yang didn’t seem to reciprocate.  This will almost certainly be a rather large matter to overcome, especially considering Tai’s motivation, revealed to us at the end.  His worry for Ruby, as well as her obligation to watch out for Yang, provides a decent amount of depth for him as a loving father, while also giving Yang reason to push herself in the coming episodes.  It’ll be very interesting to see how these two interact, considering their contrasting opinions and motivations, and I can’t wait to see how it goes down, especially considering the ending of the episode. 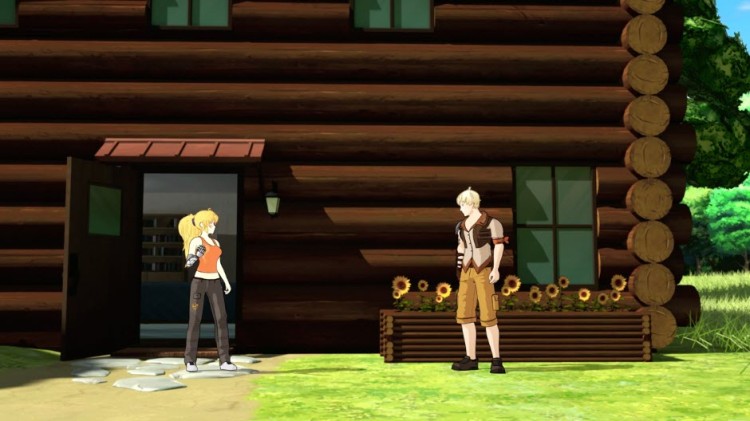 In yet another huge bombshell, we’ve finally got a look at the actions of Qrow, and, finally, an introduction to his sister, Raven.  We know that Qrow has been looking out for the newly formed team RNJR, but finally seeing some effects of what he’s been doing is rather cool to see.  Qrow seems a lot more consistently serious now, and it’s very cool to see how he’s acting, in a rather dark time.

Of course though, the highlight of this episode was not Qrow, but rather, Raven.  It took a long time to get here, and we are left with more questions than answers, but man, about time.  Everyone expected Raven to be a traitor, an informant to Cinder, or somehow an infiltrator of the White Fang,  but instead, we hear that she and Qrow were raised by some unknown tribe!  What’s more, that this tribe had been responsible for the destruction of Shion!  This origin, this bit of backstory is personally far more interesting to me than a direct relation to the main plot, just because of the insight it gives to Qrow himself, as well as all the questions it raises, regarding Raven herself.  How did she get to Beacon?  How does she know Salem?  And, probably most of all, how will she and Qrow end up influencing the journey of our protagonists? 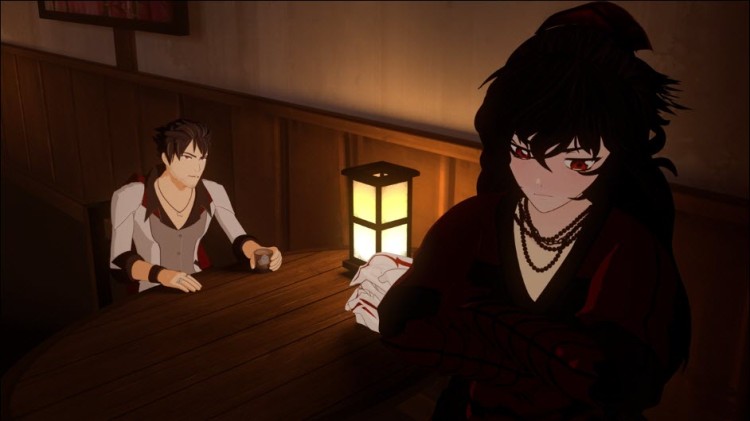 The plot details that were received can’t be overlooked either: Raven and Qrow both know of some secret object that Ozpin kept, just as Salem seems to want to desire a mysterious “artifact.”  Mentioning it here links both Raven and Qrow to that ultimate goal, to whatever Salem wants, and functions as build-up for future episodes.  Qrow and Raven are both obviously powerful, knowledgeable people, operating in a world that the audience has just recently begun to find out about,  and so, giving us a look at the interactions between two such people is just…so, so interesting.  In true RWBY fashion, they’re giving us so many implications, so many small, ominous statements, many of which I’m certain, won’t be answered anytime soon, but set up the rest of the plot very well.   I feel like I’ve said this a lot, but this episode, as well as the last one, seem to be building up for the rest of the season, and I’m just hoping that whatever Roosterteeth gives us, it delivers.

Well.  That’s all my thoughts I’ve got on this episode.  Onwards to the next one!